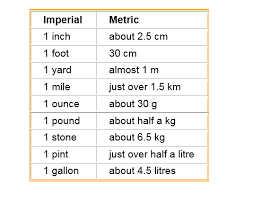 I feel like every time I hear someone proposing that the US should be using the metric system, I feel like they just want to sound smart.

Well, here is the problem with all of this buck-o in one simple question….how much do you weigh? AND DON’T LOOK AT THAT CONVERSION SHEET AT THE TOP!

Yeah, I know you did. You just took your weight in lbs and divided by 2, and rounded down.

And there lies the problem with metric.

All units, be they grams or pounds, or miles, the kilometers, are just arbitrary measurements agreed on by people historically. IO mean there is no tangible reason why a mile is longer than a kilometer, it is just the way it occurred.

And that is fine. But because of this, the strength of units of measurements lie in what the masses understand them to be.

For example, if you ask directions from a Canadian and they say the pumpkin patch is around 4 clicks away, you would probably have to loosely convert that to miles (~4*.6ish) and think it is about 2.5 miles away.

Again, there is nothing inherently wrong with saying 4 clicks or 2.5 miles, but what is wrong is to think it is easy to change an entire country’s conception of distance and weight.

I mean this is something that would take an entire effort of a nation to do, starting with ingraining the youth about how to think metrically. And this can’t just be done in school, parents would have to buy in. Businesses would have to buy in. Hell, we can’t even get people to wear masks during a fuckin’ pandemic, you think that having everyone agree to ‘think metric’ will work at all?

And why should we even ask? I mean is converting from miles to feet really all that big of a deal? If metric’s biggest selling point is easy conversions, well I don’t think that is such a great deal.

And as far as the entire world using metric…well, if the world says to you to jump off a bridge, would you do it? BAM!!!

Anyway, the point being is that there is nothing wrong with thinking in miles and pounds instead of meters and grams. Even the most advent supporter of the metric system that I know still has to do that silly conversion from pounds to kilos in their head if I ask ‘how much do you weigh’.

Besides, if you want to get really mathy and smart, base 10 isn’t even the optimal base. If I had my way, we would all be in base 12.