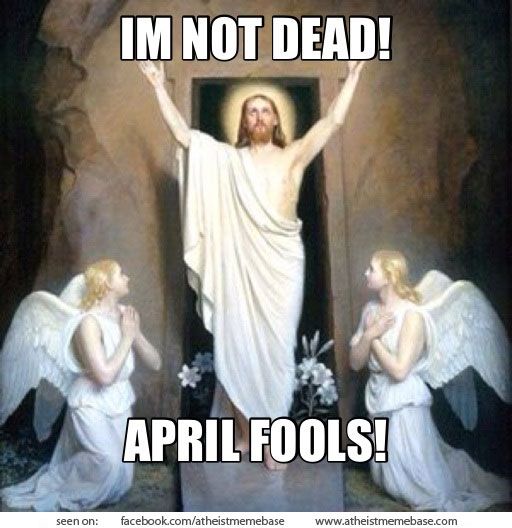 Yes, this past Sunday we all had to endure the worst holiday ever. Worst worst worst!!!

And no, it is not Easter. I mean of course it can’t be the worst; candy is waaaay too good.

I really hate this day. It is completely based on bad and sophomoric humor. I mean think about it, people lie to other people, those other people believe those words, then……..’April Fool’s!!!’. Where is the humor in that? Remember the time when I lied to you about your dog getting hit by a car….but he really wasn’t…..but you thought he was…..and you got sad…..but you didn’t need to because I was lying to you about it? Then I said ‘April Fools’ and you felt stupid that you actually trust and believe what I say? HILARIOUS!!!

What is even worse is when the media gets involved in this inane holiday. About 20 years ago, a local Seattle news network said the Space Needle fell. They even had pictures of this, doctored of course. People, being stupid enough o believe local news, thought it happened. After about 10 minutes, apologies were issued and I’m sure some people got fired. April Fools!!!

People don’t like being fooled. It just plays on our natural wantingness to believe and trust the people we are around. It is also very easy to burn that bridge.

Luckily for me, there was no April Fool’s nonsense on my Sunday. But I stopped believing in anything a long time ago…………