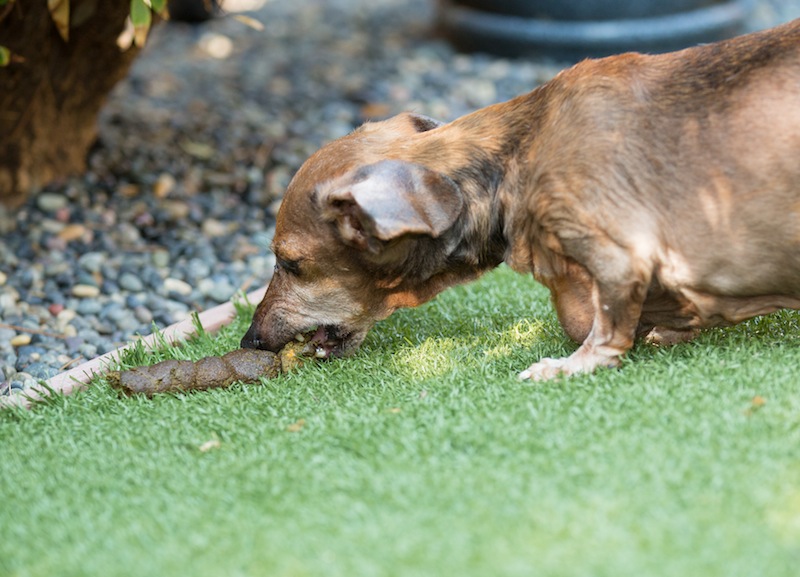 There is a psychological phenomenon where you don’t mind the smell of your own poo. This goes beyond poo, may include such things as your breath, burps, farts, BO, etc. But it is weird that your own poo doesn’t smell as bad to you as it does to everyone else in the world. Maybe it is because the poo is sort of like your own creation and there is a sense of pride it in.

I have also heard this can extend to your kids. Their poo, burps, farts, etc don’t seem quite as bad to you as they do to others. I cannot attest to this one personally, but we have all seen parents sniff diapers and not die from revulsion. Maybe this is because the kid is sort of like your own creation and there is a sense of pride it in.

Either way, this is not true with your dog.

During our walk yesterday, my dog sniffed around, found a piece of dog poo, and before I yanked on her leash to distance her from this potential treat, she ate it.

After our walk and I fed her some real food, she jumped on the couch next to me and just started breathing on me. Yes, she was filling my face with her eating-poo dog breath. And it stunk. Really bad. I had to push her away it was so bad. Ugh.

This is such a downer. I mean I know one doesn’t necessarily respect their dog (it is JUST a dog when it comes down to it, they eat your food, never chip in for rent, and just shed over everything without ever cleaning up after themselves), but damn, eating poo is something that no one can respect.

This started me thinking; can any one person wash off the shame of being caught eating poo? If we have a picture of Einstein nibbling on some excrement, would we still believe E=MC^2? If Beethoven was caught dining on some feces for dinner, would we ever listen to his 9th again? Probably not. I would even bet that if Donald Trump was caught staring at a turd (human or animal) on the floor, look around sheepishly to see if the coast was clear, bend down his fat body to pick it up, look around again just in case someone snuck in, and started nibbling on it, that would hurt him more than any sexual harassment case ever thrown at him. Yes, he may be able to shoot someone in Times Square and still garner the support of that 30%, but ‘Poogate’ may be the one thing that could chip away at his base.

It just sucks that every time I have to look at my dog now, I have to recall the time she ate another dog’s poo and breathed in my face. Yes, I will still feed her, walk her, wrestle with her, and love her, but man……..eating poo? I know that is something all dogs do (one of the main reasons why dogs will never supplant humans and rule this planet), it doesn’t really hurt them that much, they have very underdeveloped tastebuds, and it is sort of natural. But c’mon!! I mean she even went out of her way to track down the poo. On the way back, she wanted seconds. And I feed her after every walk!!! She knows this!! Why not wait?