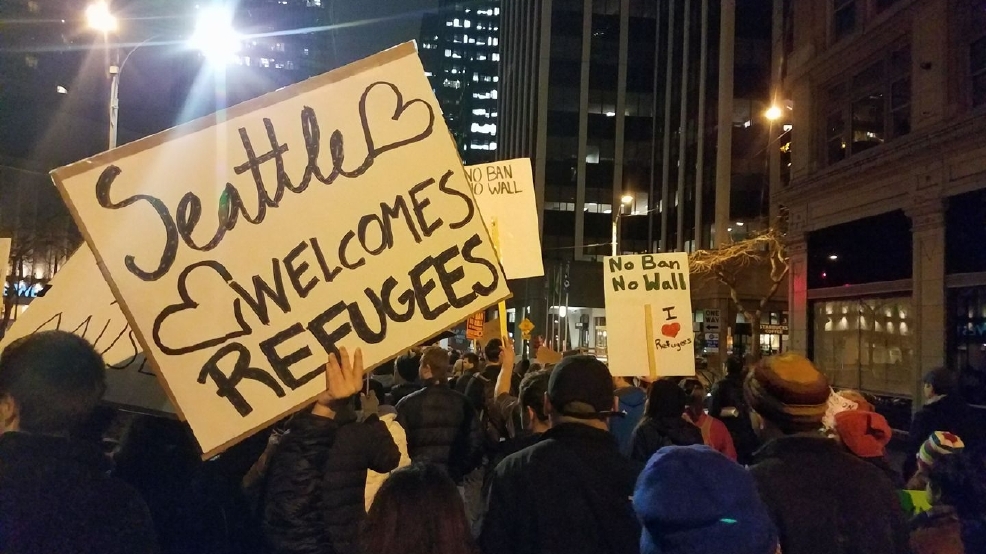 Seattle is a funny town. In some ways they are very progressive here, such as their acceptance of the LGBT community, the legalization of marijuana, the ultra-liberal stances they take publicly, and of course the way they vote around here.

But in other ways….not so much.

People here tend to not vote for tax increases, people here embrace their no income tax status yet don’t mind getting reamed by huge regressive taxes like sales tax, there is some strong puritanical laws about alcohol and its distribution, and the way they cling to their gun rights.

But the biggest hypocrisy about their ‘progressive until it effects me’ mentality is one that I feel every so often; the welcoming of outsiders to their city.

As you can see above, Seattle claims to be a place welcoming to all and accepting of new ideas. Seattle loves to march, protest, and parade on behalf of immigrants; legal or otherwise.

When people move to Seattle legally within the country for a job or whatever, they are not treated with the same welcoming tone.

For example, on more than one occasion when I tell people I moved to Seattle a few years ago, I am treated a bit different, like an outsider that is a contributor to the trend of transplants taking over the city, imposing their views, and ridding the culture that existed prior. My opinions on the city are minimized. My thoughts on local affairs are pretty much ignored and even received as an affront, because I haven’t lived here for 30+ years I just would not understand.

Hmm….wonder if I had a hijab on I would be treated different.

Anyway, you can see it at grander scale. Just read up on the ‘Seattle Freeze’, something I am not 100% sold on but it fits in well with my argument here. Or how about ‘Keep it local’; mantra that resonates all over Seattle, from real estate development to restaurants. Doesn’t sound too divisive, but there is a negative undertone to it; you are not a part of us and you are not welcome. Sure, the expansion of Amazon and friends is a complex issue; on one hand a lot of new money is coming in but the cost of living is getting inflated at an unreasonable rate. Regardless, Seattle natives do not see any nuance in this issue.

The new arena deal struck between the guy who built LA Live is under criticism in the city. Why? Well, this is an outside guy and NOT the local guy who has been proposing his plan for 8 years. Sure, it is nice to be loyal to the area, but try rationalizing with one of those people about the other side. Good luck, especially if you were not born here.

I know this is not just a Seattle thing. People are possessive about certain things in their life and do not like to share. But it is hypocritical and frustrating when you see those people swim in their sea of ‘everso tolerant’ smugness yet will not extend those same thoughts to others.