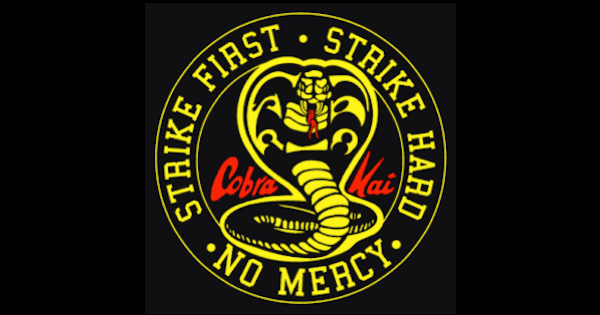 I have decided to learn karate.

Now that may sound sort of lame for a 40-ish man to try to pick up karate at this time of his life. I mean karate hit it’s hey-day in the 80’s, and now it just looks sort of stupid. Also I have never done anything close to karate, over than wrestling my dog to the sofa and pinning her (I still don’t think she realizes it is a competition).

But I am going to learn karate. To be more specific, the ways of Cobra Kai.

Yes, my friends, Cobra Kai is back!!! That mean, nasty dojo located in Reseda, California is coming back to life. Oh yeah, and for those who don’t know what I am talking about, the bad guys in Karate Kid circa 1984.

In YouTube’s initial effort to enter the world of original content, they have decided to resurrect Johnny, Daniel LaRusso, Cobra Kai, and all of that stuff in a show called….well…..Cobra Kai.

It is set in modern day times in California where we see a 50-ish year old Johnny, sort of living a loser’s life, scrapping for money here and there. We also see Daniel LaRusso, the go-to high-end car dealer in the Valley, become very successful with a beautiful family. So here is the twist, Johnny is now the sympathetic character and Daniel is sort of a doucher. Well, let’s hold on here….Johnny is still sort of an ass and Daniel still has some redeeming qualities. But regardless, there is more grey area in this extension.

So the conflict: Johnny reopens Cobra Kai and recruits (sort of) a but of nerds….yes NERDS…..to learn the ways of the fist. Oh yeah! The bullied are now becoming the bullies!! And Daniel, well he is trying to fight the reopening of his great nightmare from the past, but to no avail. Sounds good? Fuck ya it does!!!!

Oh and don’t worry there are plenty more things going on here. Daniel’s daughter is involved, the main student of Cobra Kai is a Daniel clone from 1984, and there is even a tournament looming. And yes, bonsai trees aplenty!!

This show is so much fun for Karate Kid fans, I highly recommend it to those who dream of kicking someone in the face via crane-stance. It is the perfect blend of over-stated story telling from the 80’s, a lot of allusions to the original without being bogged down in the past, and despite the cheesy and goofy nature, there are some complexities in there that make it a bit more interesting than straight forward good vs bad or right vs wrong.

Anyway, next time you see me, I may be in my black gee with a big badass serpent on the back. If so, you better wax on/wax off because Cobra Kai strikes first, strikes hard, and I will show no mercy!!

Or I’ll start to lose interest and go to something else. Whatever.