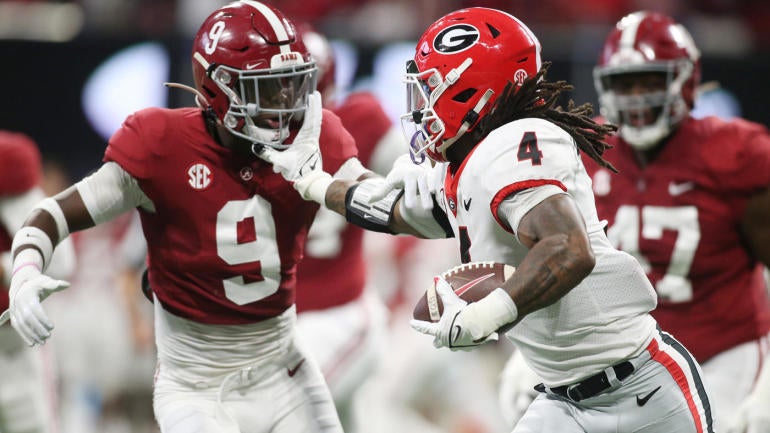 So Georgia beat Alabama last night to win the NCAA title….first in 40 years.

The likelihood of this being the final game at the start of the season was about….say…80%? It was clear, even 3-4 years ago when you saw the recruiting classes these teams had that they would end up here.

And next year won’t be that much different.

Yeah, Clemson may get in there again (and they probably will) and Ohio St will be sneaking around, but honestly I can tell you that Georgia, Alabama, Clemson, Ohio St will make up at least 2 of the 4 spots in the college football playoffs in the foreseeable future. Also in 4 years, USC should be there as well. And if any interlopers cut in, like Washington 6 years ago, or Notre Dame does every so often, or Michigan/Cincinnati did this year, they will immediately smacked down hard and be sent back where they belong; not on their level.

So how do I know this? Well, other than the easy observations over the past 10 years of college football, but beyond that, just look who recruits best……on the line of scrimmage. That will tell you the story. All the big uglies that have pro potential go to those big 4 schools listed above, and there is not enough big boy talent for other schools to compete.

How did it get to this? Well, it has always been sort of like this; only a handful of schools get the big talent therefore only those schools have the rights to be the best as the rest watch with envy. But I would argue it is even more exclusive of a club. Or to be more precise, more exclusive regionally. Clemson, Georgia, Alabama, LSU, are all good ole boy southern schools, Ohio St (soon USC) being the only one not in the Land of Dixie. And why is it these select teams?

These are the schools that put in a level of money that most would find insane for a college game. But there you go; money.

Granted, money doesn’t directly buy titles, just ask Texas and Tennessee. But this gap of investment by schools that are in the same division and conference makes the haves vs have nots at the largest disparity I’ve ever seen.

Now the trick is that this chasm of have vs not-haves doesn’t affect the Arizona’s and Washington State’s of the world; they are already very well aware of their rank in the caste system of DI football. The teams that are the most affected and don’t even know it are the Washington’s, the UCLA’s, the Michigan’s, the Oklahoma State’s et al of the DI-verse. These are programs that think they are just one coach away, or one magical season away from really being a part of the cool kids in college football.

But no. Sorry. Washington, you are waaaaay closer to Washington St than you are Ohio St in this world. And the only way to get into that group is not by hiring Don James incarnate. You have to start with adding at least $100 million a year to just football. At least. And yes, add…not total….add it to what you do already.

The reality is that this is DI football; a select elite few Harlem Globetrotters vs a bunch of Washington Generals. So instead of complaining about the SEC winning the title almost every year and wanting no rematches despite these two teams CLEARLY being the best in the land, and instead of throwing millions more of your college’s money on a bunch of kids playing football, just appreciate the regional aspect of the game and let the southern states wallow in the mud of their own version minor league football.