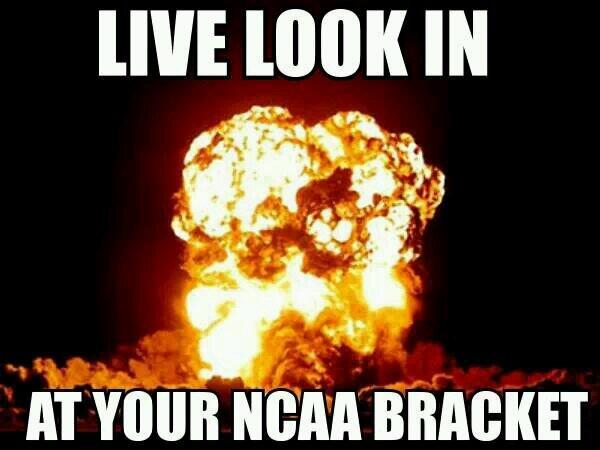 The Final Four; that time of year where everyone’s bracket is ripped up, out of the office pool, busted, or just plain wrong with the exception of the 4 or 5 people who got ‘lucky’.

I, like many of you out there, are in that exact position.

Oh sure, I turn in a bracket or two every single year just for fun and to partake in the madness which exists in March. For that one I just jot down a few teams, cross my fingers, and pretty much lose my $5. But that bracket is not my REAL bracket.

My REAL bracket is the one I slave over for hours on end, studying all possible match-ups and carefully calculate probable outcomes for each and every of the 2^63 games. I watch game film, talk to other experts, draw out scenarios that every team has to face, just so I can maximize the likelihood of making the correct predictions. Yes, it is a lot of work, but it pays off in the end.

How does it pay off? Well, since the NCAA expanded to a 64 team format (1985), I have been delving deeply into filling out brackets. And ever since that time, I have not once missed a Final Four. Not once!!! And I have not only nailed every Final Four, I have also named the winners of each game. From the improbable Villanova run in ‘85 to the more predictable UNLV roll on 1990, my clairvoyant abilities have not let me down.

Now I am not saying that I get EVERY game correct. That is too much to ask. For example, I didn’t see Syracuse losing to Richmond in the first round years ago or prognosticate that Arizona would lose to Miami, Ohio in 1995, but those are mere bumps on the road to another perfect Final Four bracket.

How do I do it? Work. Intelligence. Number-crunching. Exact mathematical models that are generated over and over again that accurately depict the final result.

So, who is going to win this weekend? I’ll reveal what I said come next post………..